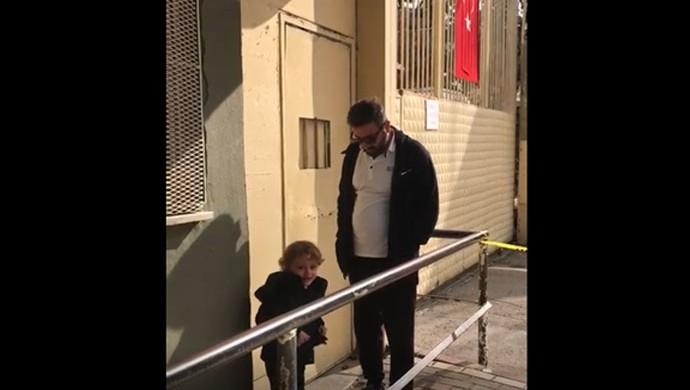 Guards deny entry to toddler who stays with his mom in prison, making him burst into tears

Miraz, one of the hundreds of infants who are held with their mothers in prison in Turkey, burst into tears after he was not taken back to prison by the guards who asserted that it was a public holiday, after spending the weekend with his father.

BOLD – Miraz baby is being held in Gebze Women’s Prison with his mother, Gülistan Diken Akbaba. He was taken out of prison on Friday by his father, Cengiz Zaza Akbaba, to spend the weekend together. The father, who spent all weekend with his son, went to prison on Tuesday with his son to leave the toddler with his mother again.

After attending a non-contact visit with his wife, Cengiz wanted to leave the child to his mother. However, the prison officials stated that the mother cannot take the boy on the grounds of having a public holiday. Turkey commemorates the 29th of October as the day the Turkish Republic was founded.

His father went out along with the kid when Miraz was not allowed to stay with his mother despite their objections. His tears were recorded by some relatives.

There are hundreds of pregnant women and mothers with their babies in Turkey’s prisons, even though the practice is against the law in the country. While some pregnant women undergo miscarriage due to poor confinement conditions, some babies in prison also suffer from growth retardations. During the post-coup crackdown, women associated with the Hizmet Movement and many women from the Kurdish cause faced this situation. Likewise, there are many children with their mothers who have not reached the age of primary school in prison.

Miraz and his mother in prison.