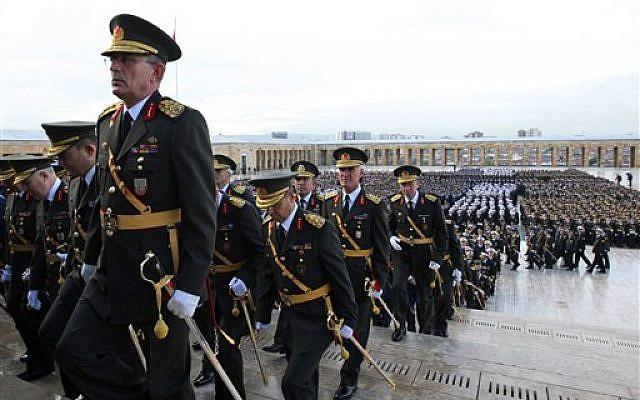 How is Turkish Military Personal who served in NATO being purged in the Turkish Armed Forces?

History repeats itself, the best way to empower despotism is to establish own Army. This is the similarity of Stalin and Erdoğan.

Stalin purged tens of thousands of officers from the Red Army after the Great Purge between 1936-1938. What happened in the Turkish Armed Forces (TAF) after July 15 also reminds great purge.

So, how is the ruling political power conducting this large-scale purge in TAF, Turkey’s oldest institution roots back to many years?

Those who will write today’s history will note that civilian-military cooperation was perfect on the “purge operation” after July 15, even if it was not on the battlefield.

After 2008, a core staff working inefficient posts in TAF started a detailed tagging activity of military people. Their priority target was the officers who served in NATO.

After July 15, these tag lists are the primary source for the purge process of dozens of generals, thousands of officers and TAF personnel.

While these tag lists are forming the backbone of the purge process, the prosecutions primarily serve to fabricate evidence on target names.

Then TAF gets in touch with proxy prosecutors and issues a criminal complaint file with these reports. The proxy prosecutors open a secret investigation file. The most important part of the process starts here. In order to gain public support and provide legal reasoning to prosecutors, this process is leaked to media.

After this topic gets matured in newspapers, retired soldiers, so-called proxy experts, such as Ahmet Zeki Ucok, Mete Yarar and Ahmet Yavuz address their concerns on TV to shape public opinion and gain support.

Then prosecutors launch the operation by accepting what is written in newspapers and what is said on television as an indictment. And dozens of soldiers are being detained in one day. Some of them are forced to sign ready statements by torture or other promises. Names of other soldiers who have been tagged before are also included in these ready statements. The statements of the confessor soldiers are immediately leaked to Nedim Sener. Nedim Şener shares this with the public in his new article, and he starts the groundbreaking activity with a few sentences for future operations.

This can be better understood from a concrete example.

On 7 October 2019, Nedim Sener wrote that the Fethullah Gulen Movement had chosen its own men in the entrance process of the Turkish Naval Academy. On October 18, military officers were detained at the end of the Istanbul-based investigation. 18 officers were arrested. Their testimonies were taken with torture and intense psychological pressure. The statements were immediately served to Nedim Sener and Sener wrote these statements on October 23rd.

He also added that “If this happened in the Navy, it must also have happened in the Air and Land Military Academies”. Thus a similar operation was paved in the Land and Air Forces.
Everything is happening in front of the public eyes and the TSK is leaving the Western pact step by step with this massive purge.

So, what did Stalin do after the great purge? In 1943, in order to save his country from the German occupation, he released the imprisoned soldiers and returned them to their posts. Should Turkey live the same misery to put an end to this carnage?